Why I'm not Pioneer Woman

So last week I got all excited about starting to sneak vegetable and fruit purees into my family's meals. Right about that time I saw this post from the queen of instructional cooking: Pioneer Woman. I've never made any of her recipes, but I figured the pumpkin puree would be easy enough...since it only had ONE ingredient. How hard could it be?

If you read her post, you will think that making your own pumpkin puree is the easiest thing in the world. I still believe it is, unless you're me. And my oven.

Everything was going just fine (with the help of my Curious Georges)... 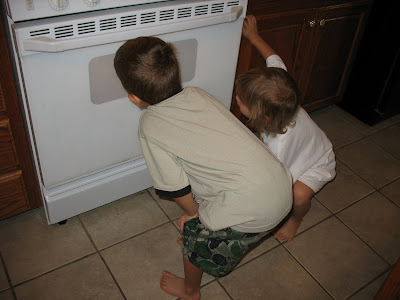 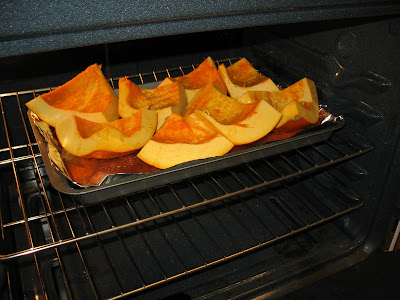 ...until I got to the puree part. The critical part, I suppose you could say.

My little mini-Cuisinart started tripping over large chunks of pumpkin that didn't get cooked through during the roasting process. A little like driving along a smooth highway and then hitting a speed bump. Then another, and another, and another. I had checked the pumpkin to make sure it was soft enough, but apparently I shouldn't have taken the word of just one sneaky piece: 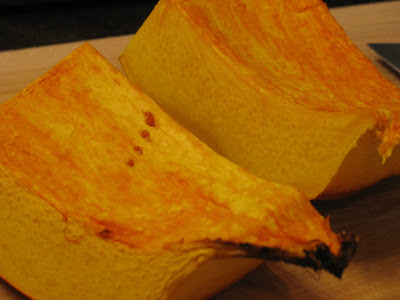 So I figured, well, that's a problem, but not unfixable. I'll just strain the puree through my colander. Riiiiight.

The puree was too thick to fall through the holes. It needed a little coaxing, only I couldn't quite find the right coaxing tool. I was really wishing I had one of those things my mom had (has?) when we were growing up...that thing with the wooden thing that pushes stuff through holes and then it falls down the sides into a bowl. I'm sure you know what I'm talking about.

Anyway, so I tried a rubber spatula to push it through. Effective but slow. I tried pushing a small saucer down over it. Pumpkin smooshed out around the sides. A mess (ya think?). Then I tried a pasta scraper thingie...a bigger mess.

So I looked at Mickey, who was watching the process unravel the whole time, and said "...there's only one more tool I haven't tried..." I turned to the sink and washed my hands WITH SOAP, then dove them into the puree. Messy? Yes. Slow? Yes. Effective? Finally. And entertaining for little boys.

I was left with a bit of a mess...and since the process, started right after breakfast, took a mere three hours longer than I expected, I had to fix the boys lunch amidst it all. That was fun. 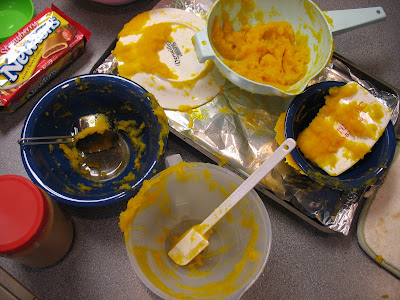 But by golly I got my pumpkin puree in little half-cup portions. Which will be consumed by members of my family in one way or another. 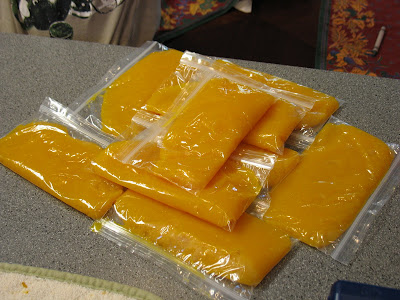 So who knows if I'll ever have the courage to try another one of Pioneer Woman's luscious recipes...I may need therapy first.

Well, your puree ended up looking very nice. Ok now, this is Mamma who has made much puree through that "thingie" with the wooden "thingie". I found it easier to cut the hard peel off, then simply boil or simmer the pumpkin till very soft. Drain thoroughly and then put it through your colendar or whatever to mash it up. Takes less time as it does not take long to soften up.
Good job Christine. Actually I never thought any of my daughters would cut up a pumkin and cook it...

Can I have one of those baggies of pumpkin? Ha!
jw

bahahah! So sorry, I am not laughing at you, I promise. I just can totally relate to this. I always have the best of intentions, I tell ya!

I've "done" pumpkin before and have two waiting in the wings. I was going to try this method but now you have me reconsidering. Maybe if Mama brings her "thingie" with the wooden "thingie" this weekend. (By the way, Mama-who-spells-her-name-Mamma, I've always liked that wooden thingie.)

Anyway, I'm proud you stuck with it, lumps, lunch, kids and all. Oh, and I've added pumpkin to chili before (it was an actual recipe, promise) and it was great. No one ever knew it was in there.

Monica, I would do the roasting again, just longer. The prep and everything was so easy and the peel came off very easily, too.

Of course what I honed in on was the Fruit Newton's in the picture. I'd probably eat the pumpking puree by itself.
RJL