Just so you know, the snow didn't stop for quite some time. 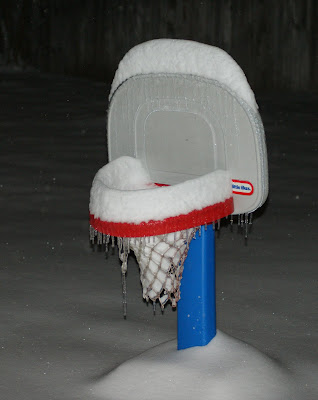 ...and there were at least two very big icicles hanging around, until the boys spotted them. 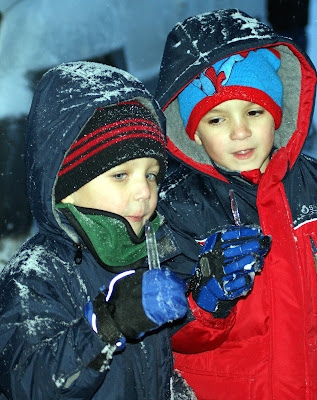 We here in Okie-homa are smack in the middle of a big 'ol snowstorm. The weather people in town are all breathing a sigh of relief that the snow is coming down in large quantities, on top of a half-inch of ice...BECAUSE THEY'VE BEEN SCREAMING IT AT US FOR SEVEN DAYS!

After it had been coming down for a while I finally slid open the patio door. The boys were upstairs so all was quiet. Have you ever heard snow fall? It hits the surface with little crystal-ly sounds...really softly. If it wasn't 25 degrees I'd have stood there a good long time, just listening. 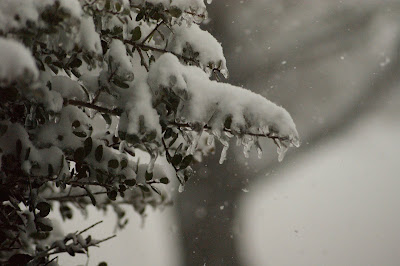 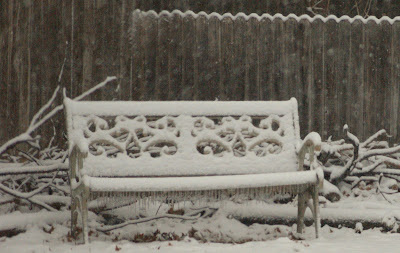 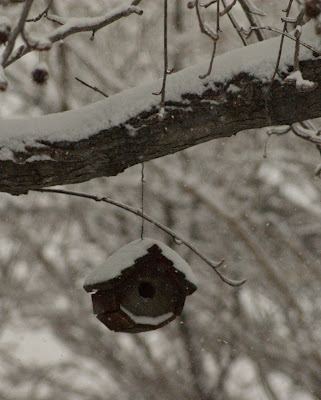 Then I hear a rumble from above and it's Mickey bounding down the stairs ready to "touch the snow!!!!!" As if he's never seen it before, out the front door he heads.

And suddenly snow is the coolest, rockinest thing on Earth.

And I couldn't hear anything soft at all, unless you count "...woooowwww!!!" 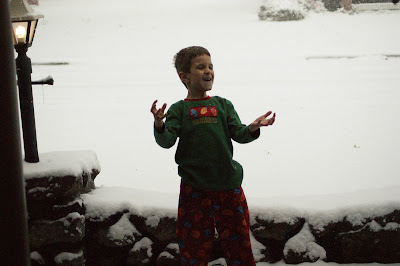 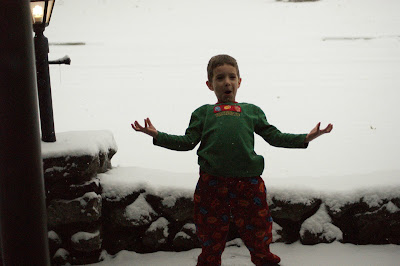 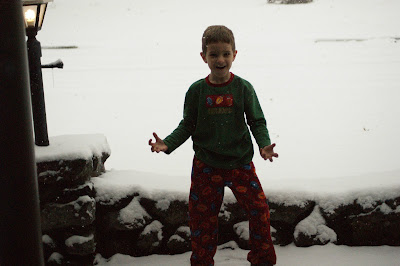 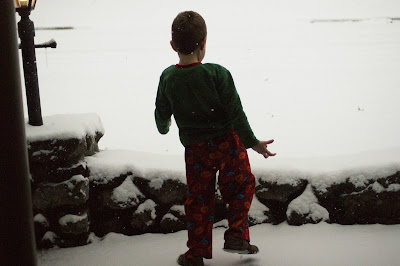 I've always liked the photo below. I took it in October of last year at my sister's house...um...not in Tulsa. She lives in a small town but has big views of sunsets. And sunrises. And sky in general. I miss that about living in a small town. In the middle of Tulsa we see our broad views of the sky on TV...or when we visit relatives.

So I love this shot.

And whaddya know...so does The PW. I know, duh, you can see the pic right here on my lil' ol' blog.

But go ahead, take a look at it on the big stage. I'm not sure it's worthy next to shots of the Eiffel tower or beautifully silhouetted couples and children, but for a fleeting moment maybe it's not so mediocre.

Certainly the sunset view from my sister's house is not... 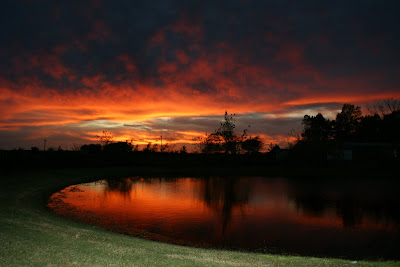 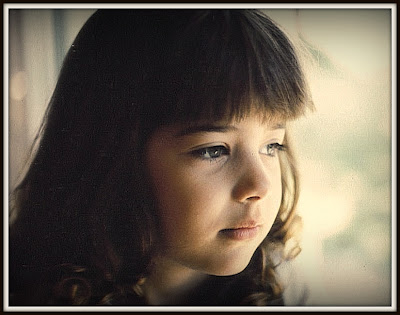 This little girl's got a lot on her mind. She was probably only four at the time, but I think she was already thinking big. Even though she was gazing out the window of her grandmother's house, I think she was looking past that driveway in Oklahoma. I think she already had in her little mind that she was gonna see and experience a bigger chunk of the world.

That little girl, well, she's not so little now. Today's her 25th birthday. She's my niece, and I like to live vicariously through her (and the rest of my nieces, come to think of it. Who knew they'd be good for that?).

Something else I'm procrastinating

My photos. They are sorely in need of attention.

Why, you may wonder.

Behold, the only photo I have in the December 2009 folder on my computer: 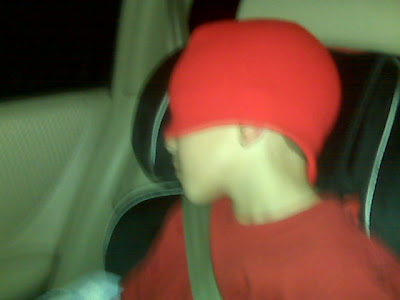 Ain't she a beauty!? It was taken by my talented husband. Yes, this photo is a result of talent I say! Since he was driving when he took it. With his cell phone. At night. And yes, he was severely scolded for it. But it was an amazing feat.

More amazing than the fact that Mickey chose to sleep this way for 45 minutes.

And these bad pics shall be forever cherished.

An icy activity when it's 10 degrees.

Northeastern Oklahoma has finally emerged from a cold snap...a cold snap that closed school for two days because apparently there are kids in 2010 who walk two miles to the bus stop. Temps last week were in the single digits three nights in a row and a couple of days we never made it out of the 'teens.

So the boys and I were home for two days, because really even getting in and out of the car just made just made us all angry. In my desperate search for out-of-the-ordinary stuff to do, I came across this activity on 918moms.com (you remember them, don't you?) and had to give it a try.

First of all, I didn't take pics but of the result. Methinks I can explain this one ingredient recipe without illustration:

1. Get a pan, something flat and shallow like a jellyroll pan.

2. Dig out your cookie cutters from the recesses of your cabinet, unless you have yet to put them away from Christmas like me. Lay them in your pan, making sure they don't touch.

3. Cut some string or yarn in lengths of ten inches or so, one for each cookie cutter.

4. Loop the string through the cookie cutter and hang it over the edge of the pan. Do not tie the string, just let the ends dangle.

5. Get a large pitcher and fill it with water. I thought it would be neat to add blue and yellow food coloring to it, so I let the boys drip-drop it in there and stir. That's a activity in itself, believe me.

6. Locate a nice flat area outdoors for your pan to rest. Our nice flat area was one step outside our patio door. Any further than that and the pan would still be out there: too far to go!

7. Put the waterless pan out on the flat area. Carefully carry your pitcher of food-coloring-ed water away from your white carpet and around furniture to the door. Poor the water into the pan, making sure it comes up about half-way to the top of the cookie cutters. Strings should still be dangling over the edge.

8. Check on the freezing process often. I had the boys checking every 15 minutes...they thought they were big stuff giving me the play-by-play. Alex got curious and wanted to touch it about halfway through the process (10 degrees outside, mind you). My first reaction was not to let him since it was so cold, then "sure, honey, you go right ahead!" So, yeah, about 15 seconds was all he needed before he scrambled back inside.

9. When the pan is frozen solid (took ours about two hours) bring it inside and get creative as to how to release the cookie cutters. We boiled water and drizzled it over the top, wiggled and jiggled and loosened...probably for 20 minutes. You'll have to pull on the strings a little to get them loose, too. When the ornament finally breaks free, tie the ends of the string together and put it on a plate in the freezer.

10. Here's some advice though: don't use the food coloring. Some of the ornaments froze clear instead of the beautiful blue green, even though they were all made from the same water. I'm sure there's a sciency lesson in there somewhere, one that I'll never know.

11. Hang the ornaments on your frozen shrubbery. They're really kind of cool! 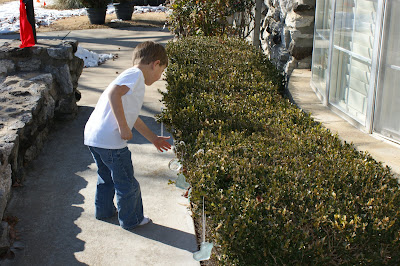 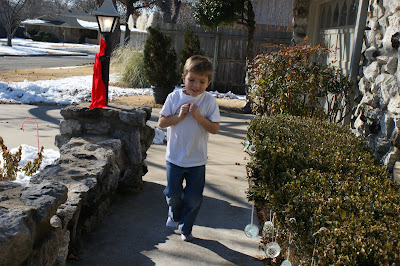 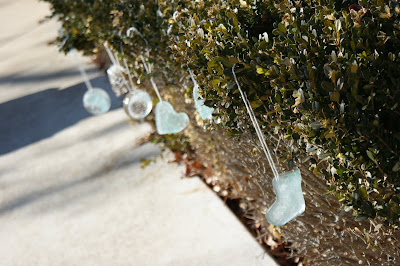 My mom. And responsible blogging.

I didn't write the book on blogging. Lordy, I didn't even READ the book on blogging. So I plan to make a lot of mistakes doing it. One big one, which I'm sure is covered in some beginning blogging guide somewhere, is to not neglect a major topic after you've written about it, leaving your readers hanging on for more information.

That's exactly what I did with my mom's heart attack. "...hey, everybody, mom had a heart attack!"

Not too fair to you guys, sorry about that. Hmm, wonder if my readership would increase if I paid attention to little details like that.

Enough mea culpas...on to being responsible:

Since my last post on December 10, mom has indeed returned home. She was tired but ready to be home, and then she went back into the hospital about four days later. She had internal bleeding due to the beginnings of a ulcer, exacerbated by blood thinning medication she was taking at the time.

Over the course of the last three weeks, she's had several transfusions and ended up spending three nights in the hospital, including Christmas Eve. Add in the freak snowstorm we had in Oklahoma that night, and it was a Christmas to be remembered (or forgotten!) for sure.

Mom is adjusting quite well to her new, salt-free and carb-counting diet. The family is trying to be there as much as we can so she will always have someone with her. She's not ready for making all her meals yet, though she's probably ready for that after my shift last weekend. As my younger sister said before I arrived "...you better bring your A-game..." in the kitchen. Um, what A-game?

Mom has a doctor's appointment this morning (my brother is there in Muskogee to chauffeur her!). She will be getting another blood test to see if the internal bleeding is still under control. If it is where it needs to be, it would be the third successful test in a row...very encouraging!

I know I'm leaving out a lot of details; I'm not sure Mom wants her every health detail posted out here. But I know a lot of you have been asking about her and she doesn't mind me posting an update here and there.

Yeah, right. I can't even take care of the one I have, much less start up a new one. For now, I'd just like to figure out how to change the language on the gray bar that appears above my blog from Dutch to something I can read. But for now, trial-and-error clicking gets me where I need to go...

So New Year's Day is supposed to be all about making a resolution...but I've found that if I give it the name "resolution," and proclaim it to a lot of people, then I have a 75% chance of not meeting it (or some such big number).

For that reason, I'm not calling any of my new little endeavors RESOLUTIONS. Then maybe I'll be more likely to stick to them. And since "a lot of people" does not equal my blog readers, I'm in the clear on that point, too.

1. Lose the weight that's holding me back. This, friends, MUST be the year I get serious about getting back in shape. I will be 44 (gasp!!) in four months and I am not living another year tired, sluggish, and unable to catch my kids when I need to.

2. Blog more often. And maybe join up again with a regular posting group again. I just need to get out there in the blogging world again and the first step is, um, blogging.

3. Don't try to be so perfect. I think one of my greatest flaws is that I limit what I do because I'm afraid it won't be perfect. I think there's counseling available for that...although decorating my boys' birthday cakes works too: they are always far from perfect. Anyway, perfectionism, if you take it from a psychological point of view, DOES NOT mean the person is perfect...I know there's only One perfect person to ever walk this earth. What it does mean is that the person is afraid of trying or doing in fear of failure.

For instance, there are several rooms in my house that are as yet undone. We've lived here six months and there are still boxes that need unpacking...mostly wall hangings. Thing is, I'm loathe to unpack them because I'm afraid I won't find the best place in the house to hang them. Or I find a place and then we decide to move furniture and then the wall hanging looks out of place. The horror!

So the boxes still sit, waiting for me to get started on my new non-Resolution.