I was going to sit down last night and write a post about the airport scene.  I thought for a couple of hours what I wanted to write: about how the kids were so excited to get on the plane and how the parents were nervous and crazy.  (Well, really just me.)  I was going to write some tearjerker thing about being proud of Carson and proud of myself for keeping my emotions in check most of the time until they began their walk toward Security.

I was gonna write all that, but then it just got too late and I was exhausted and too busy watching the little plane inch along on Flight Aware.

So, too late for that post now, I want to skip to the fun stuff!

Carson has arrived and is safely with his host family!  We Skyped with him this morning and he looks great...not tired but I know he is because he said he only slept for an hour (which could actually be 30 minutes or three hours, doesn't really matter).  He said he got to sit by his BFF and that they had a croissant on-board.  I'm sure they fed them more than that, and if not he had quite a buffet in his backpack.

He has his own room at his host family's house, and he proudly showed me a bookshelf where he "organized his stuff."  He said there's a window in his room that he can open like a door.  (And it's a beautiful sunny day there today which just added to the whole feel-good scenario.)

I met his host mom, who is so sweet and continues to apologize for her shaky English.  I told her it was perfect.  (I've also asked her to speak French to Carson as much as possible.)

This afternoon they were taking him to a park and then I hope he'll be able to stay awake until bedtime.

So here we go...the countdown to October 18 begins! 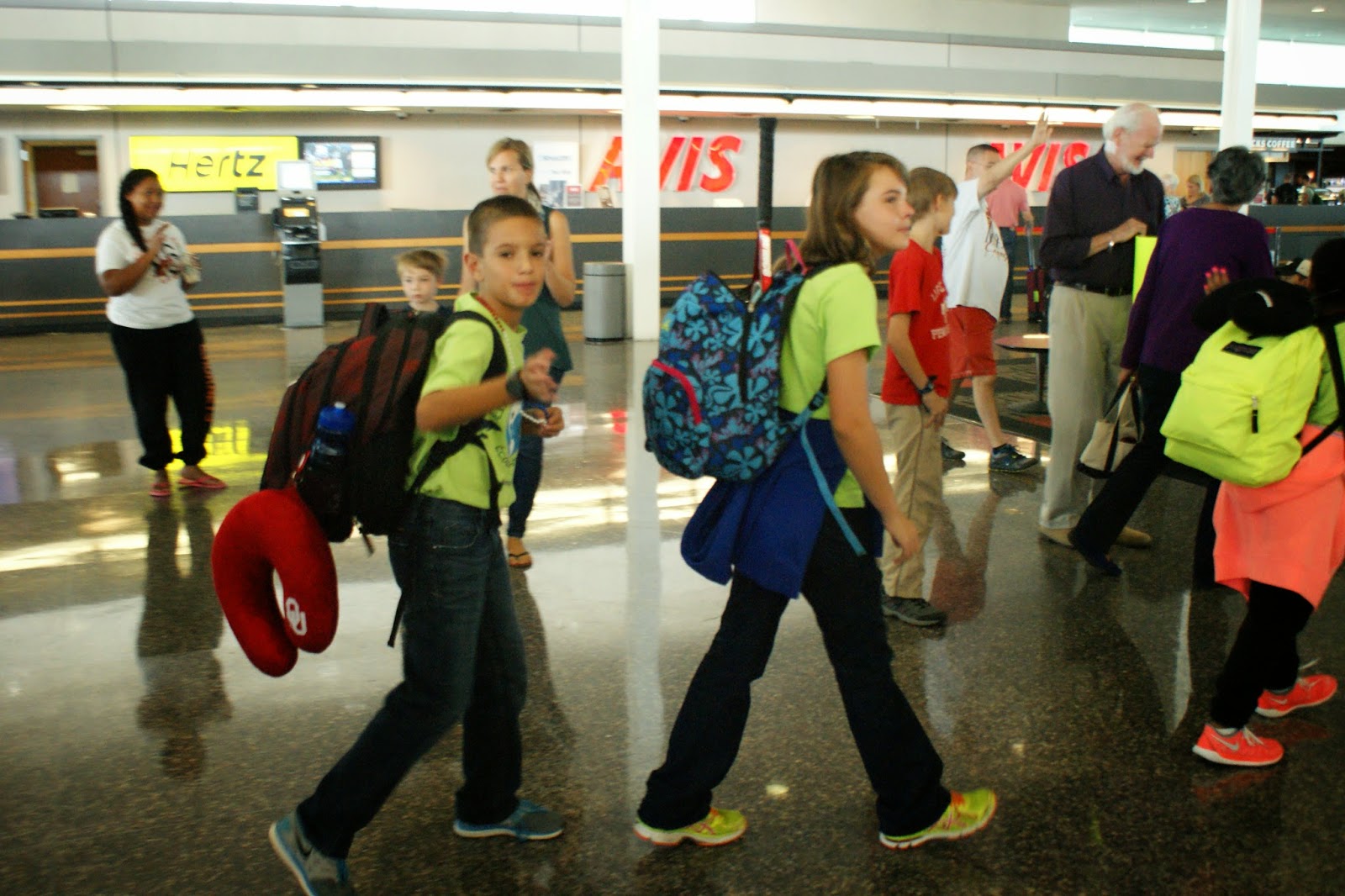 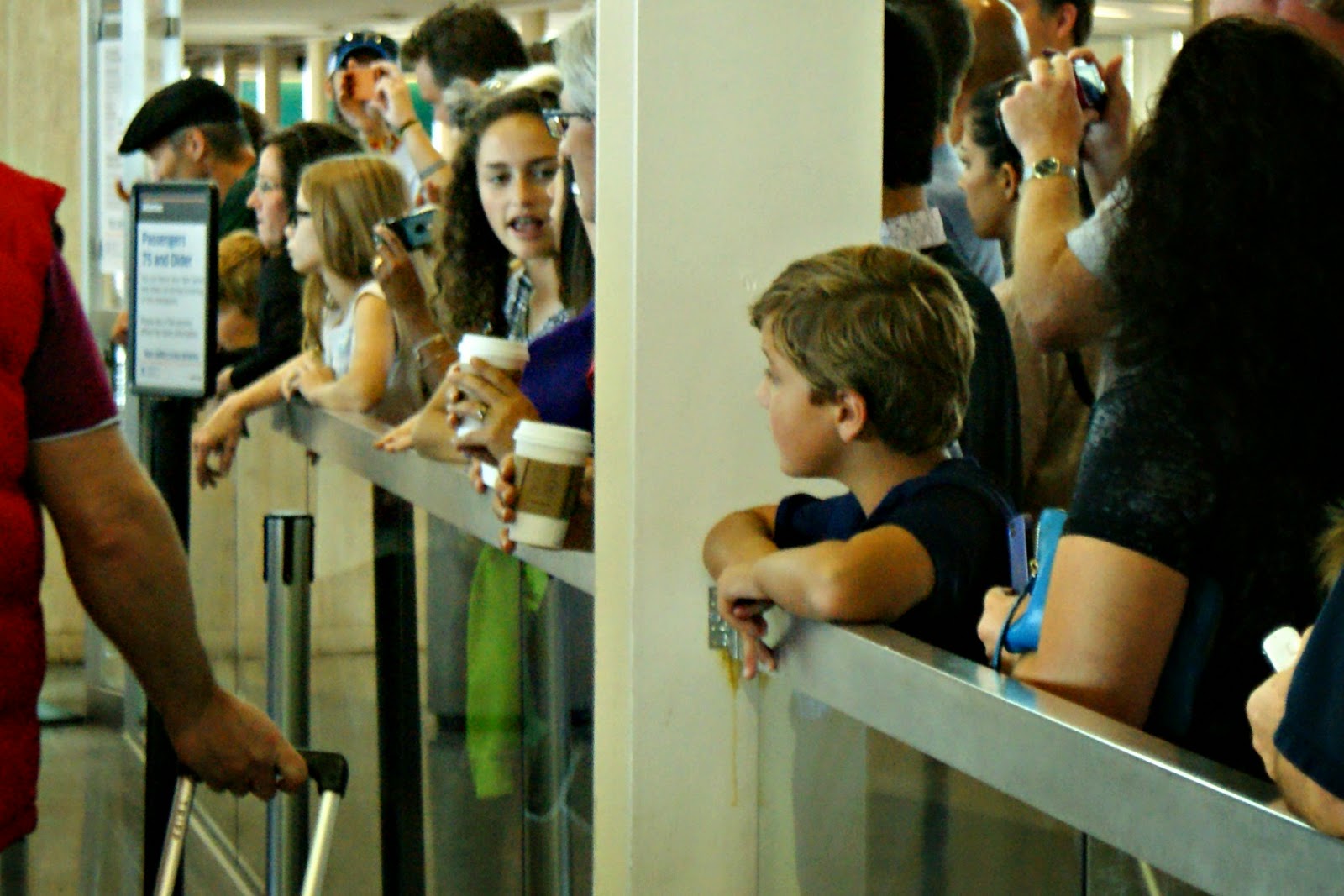 We leave in an hour

It's almost time to head to the airport.  I've been up this morning since a crazy hour making my boy whatever he wanted for breakfast and trying to think of something he might have forgotten to pack in his suitcase.  I've reached the they-have-stores-there stage and we are ready to close it up.

His backpack is full of enough snacks and activities to last him TWO international flights, but miraculously the thing only weighs 13 pounds.  I think he must be in heaven with it and all its compartments: I can still remember when he was a toddler and wanted to pack Ziploc bags full of stuff all the time.

Me?  I'm doin' okay.  Last night I told Carson everything I wanted him to know before he leaves, so I wouldn't have to try to speak at the airport.  He sat and listened and tried not to roll his eyes and I didn't even tear up one time.  I think those things I was saying...all the safety reminders, all the encouraging words, were more for me though.  He already knows them.

The most important thing I wanted him to know is that when we say goodbye I would not be talking to him because I'd be trying to keep it together, and I didn't want him to think something was wrong.

But honestly I don't think he would have noticed.  He's so ready to get on that plane he can't stand it.  And when he disappears around the corner after getting through security, I'll be so ready for him to get started on this trip.  So ready to hear about this experience, the thing that HE'S doing that I've never done.  It's gonna be amazing.

On sending Carson to France

It's been a while since I've posted anything (I know, not news to you).  Maybe this time I'm posting for myself as much as anything else.  It's a big week here, though...it's when we send Carson to France for three weeks.

There, I said it.  Wow.  It hardly seems possible.

Oh, the logistics of it are possible all right: he will depart this coming Saturday at 2:00, arrive the next morning in Paris, take a bus with his fellow travelers to the city of Amiens, and be greeted with a group lunch and his host family.  He has a passport, a big suitcase, some electronics, books, and snacks, and a journal to write about his experience.

And it's possible also because of the awesome school he and Cooper attend.  They've facilitated these exchanges many times to France, Costa Rica, and most recently Madrid.  His chaperone is someone who has taken groups of Fifth Graders to France many times: she's organized, specific about what she expects from the kids, and she's a mom.

The "hardly seems possible" comes in when I consider that I'm good with all that.  It's been a process, don't get me wrong.  When he started at this school in Kindergarten, I heard about the French Exchange and it felt scary: I mean, c'mon, Carson was SIX.  I couldn't imagine for a minute putting my baby on a plane without me.  And letting him stay with strangers for three weeks, in a foreign country.

Then over the years my "baby" started hearing snippets at school about the exchange.  I think I must have asked him a thousand times since 2009:  "Carson, would you want to go on the exchange?"  I was tempted to start fabricating horror stories about kids who wailed for days when they got over there, how French food is really horrible, and no soccer balls are allowed in France.

But I resisted, and I heard wonderful things about the experience, from both kids and parents.  The kids get to go to school, tour Paris and other amazing sites, and use their French language skills for three weeks solid.  And they come back with a new appreciation for their international counterparts.  Their global horizon is broadened.  There's emotional growth and they become more responsible.

And every single time I asked him if he wanted to go, he always said yes.  Without hesitation.

But hey, just because my kid wants to do something doesn't me we always say yes (soccer, golf, and basketball notwithstanding).  I also think Carson's mature enough to handle it.  He's comfortable meeting new people, he can handle social situations, and he is responsible with his belongings.   And he's done a little air travel so that's not an issue.  He has closed all the loopholes!