Today I'm participating in Tackle It Tuesday over at 5 Minutes for Mom for the first time...mainly because I've not tackled anything until now.
But this is a fun little event: I signed up for today's TI...wait, maybe I'll just spell it out...Tackle It Tuesday solely to see if I could get my tub clean. I can't really believe I'm posting pics of my filthy tub for all to see. I'd almost rather put my social security number on here. I promise most of my house is pretty clean, but don't we all have tasks that we put off until we can't stand it anymore and so then we tackle it and it takes us three hours to perform the task?

That's my bathroom.
Okay, so the girls at 5 Minutes for Mom had a wonderful Tackle idea where they sent Tacklers a free bottle of CLR Bath and Kitchen in exchange for bloggers' accounts of how the stuff works. And of course there are prizes involved! 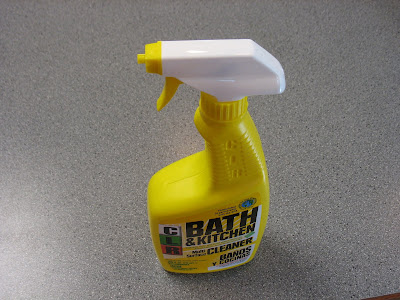 So here's my account. Avert your eyes if dirty tubs make you squirm.
But first, since the product says it can be used in the kitchen, I decided to give that a whirl. You will notice that my kitchen sink is pretty shiny, and you'll wonder why my tub doesn't look like that. But the night of the testing, I did have some scratches on it from a pan that are kinda hard to scrub off.
BEFORE CLR Bath and Kitchen: 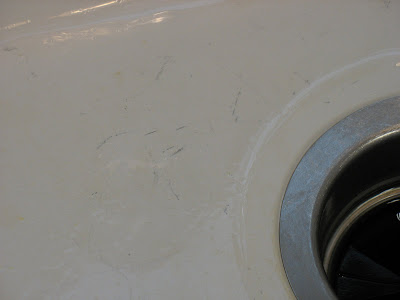 AFTER CLR Bath and Kitchen: 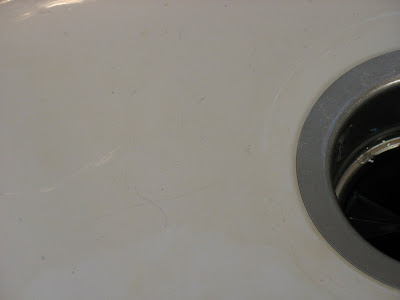 Like the instructions said, I let CLR Bath and Kitchen hang out on the stain for a couple of minutes. Then I got a damp sponge and got to scrubbing. And scrubbing. The stain did come off pretty well, but no easier than with Comet or baking soda. C- on the kitchen test.
Now, let me say before you witness the site in my bathtub, that we do not take baths in this bathtub, only showers. Our feet don't care if they're standing on a stain. And I don't wear my contact lenses in the shower so the place looks pretty clean to me no matter what. The boys take baths in another bathroom in a CLEAN bathtub. Trust me on that.
So now that I've given you all my excuses, on with the testing.
BEFORE CLR for Kitchens and Baths: 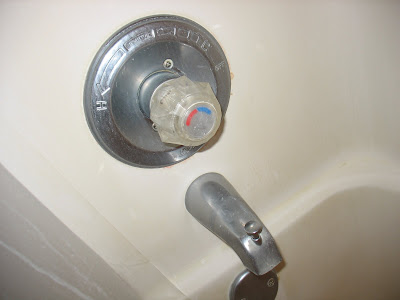 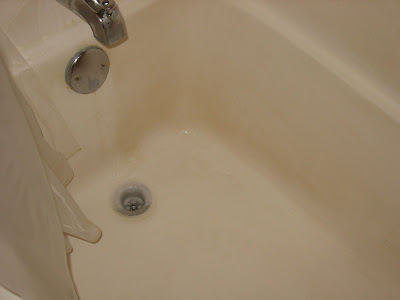 AFTER CLR for Kitchens and Baths: 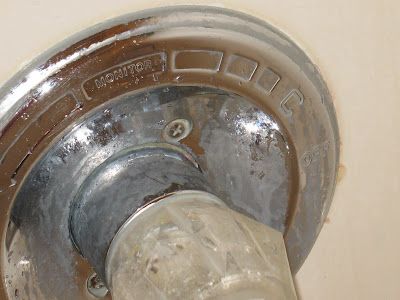 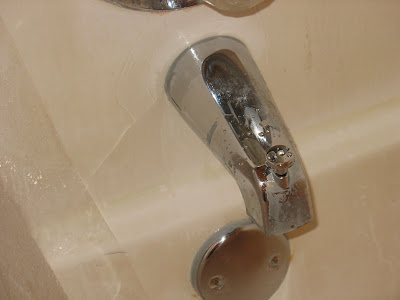 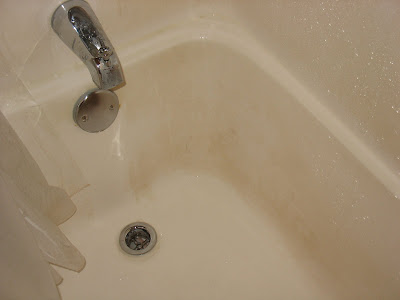 I used the product both on the tub area (in the corner) and on the fixtures. I let CLR sit for a few minutes, then got a damp sponge and tried to wipe off the grime. If you think the before and after pics of the tub look the same, you're not the only one. I kind of expected it to be difficult, but I hoped the scum on the fixtures would be gone. Instead of the shine I was hoping for, it's just mildly better. Could be I was asking a little too much from the product, although right on the label it says it attacks "soap scum." C- on the bathroom test.

Bottomline, I think CLR Bath and Kitchen is better suited for areas that are, shall we say, used to being cleaned.
For more accounts of CLR's performance and Tacklers who had better luck with this product than me, visit 5 Minutes for Mom.
Posted by Christine at 10/20/2008 09:22:00 PM

Uhhh, my tub looks just like yours, if not worse. I'm still looking for that magical cleaner. A maid, perhaps?

OK Dear Daughter, looks like I made a biiiiiig mistake in not making you clean the tubs when you live at home!!!! Sorry about that.

So teach those little boys to clean the tub too...

Try this: Do this before you retire for the night. Fill the tub with warm water.Add a little dish soap and lots of bleach. Let stand overnight. I think your tub is white. Don't know about a colored tub. In the morning, drain and rinse and then use the CLR. Also, considering the shape of your tub, I don't think you can expect it to clean it sparkling white with one treatment. Do it every day (yes, you can).

I have some CLR sitting in my cleaning supply cupboard. It is such a pretty bottle. Oh, what? You mean I'm supposed to use it? Aw, crap.

I think you are on to something...things that are used to being cleaned aren't as hard to clean. First hand experience here. So, having said that, I would give the CLR another try. I looked at some of the other links and CLR seemed to have worked.

And I have to say when I saw the first tub picture, I thought you'd snapped a picture of my boys's tub. It looks like that when I forget to tell them to clean it. (Yeah, at their ages I have still tell them.) I have given them a Brillo pad and that works. If I keep after them, it doesn't get scummy, but when I get busy it looks just like everybody else's. Sorry, Mama, just being real.

I think the dishsoap would have a chance of working, too. (I clean my shower door with cheap shampoo, did you notice??? Gets it nice and scum-free and smells good, too.) Just be sure to lock the bathroom door to keep the kids out if you leave the bathtub full of water. But you knew that...

My shower made your tub look like fine china. This is how I cleaned it just recently. I used some Arm & Hammer bathroom cleaner. I don't remember the exact name but you can't miss it because it says Arm & Hammer on it. Yeah, well...
Spray plenty of it on the tub, go away for at least 30 minutes and come back and spray again. Use the whole bottle if you have to. Leave the stuff on for at least an hour. I did this just because I got side-tracked and when I came back all the gunk just wiped off and the shower looked shiny new. I promise. You know it is clean when your husband notices!