Your kids look blah, and it's for sale!

Last weekend I took the boys to have their pictures taken; religiously I've taken them to Big Department Store Portrait Studio on or around their birthdays to preserve the moment and their newest outfit in a photo. I've taken them there so I can get decent photos at a good price, and I've been happy with the result for the most part.

Their most recent pictures were mediocre and I'm being kind. The boys were set up in the same poses they've been rehearsing for the last several sessions...so much so I think all their portraits are starting to look alike. And to my horror, the "photographer" had them saying things like "fuzzy pickles" and "cheeeese." Just typing that makes me cringe. Neither was enough to get a genuine smile out of either boy, and Mickey even looked to be grimacing.

I thought maybe they'd look better when I sat down with the "photographer" to review them. No. She'd prettied them up with enhancements (at nine dollars per enhancement) and written words on them...I suppose in an effort to soften Alex's all-teeth facial stretch. And then she tried to convince me that a package, complete with royalty-free CD (as if I'd want copies of the mediocrity), for $129.99 was by far my best deal.

At this pitch I told her "the pictures aren't that good." Then I wanted to scream "...and I'm their mother!!"

I still left having ordered several sheets of average photos...because average is still good if your kids' faces are there. And I'd fought to get them dressed and to the appointment and having to reschedule the whole thing somewhere else was not an attractive option.

But now I'm determined even more to figure out Behemoth DSLR and take my own photos of the boys. Or pay a premium for a photographer who sells skill and artfulness instead of...meh... 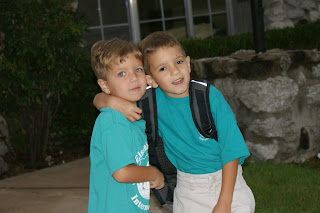 So the really good comments post twice? Did not know that.

Maybe you could submit them to "awkwardfamilyphotos.com"? Candids are still the best, anyway.

Why don't photographers carry an age appropriate joke book around to get natural smiles???? seems so simple yet we teachers are always expected to smile at the word money. rw

Do you remember the pics of C&K when they were about 6 months old. Courtesy of Sears Portrait Studio. You can find them right next to the Auto Center. Anyway, two bald heads at the far left corner of the picture and about 5 miles of empty space. I bought every sheet to include an 11 by 17. Didn't have CDs back then but I probably would have bought that too.
JS