Here's proof that I do have people in my life other than Mickey and Alex and their daddy. 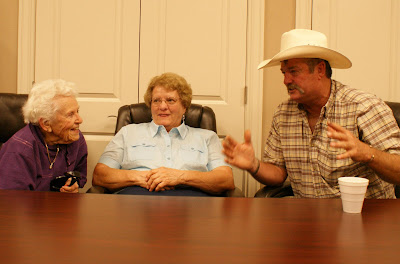 I'll start in the middle: that's my mom Rosemary. Isn't she pretty? She really hasn't changed much in the last...forever. I was about 25 before I appreciated anything she did for me (is that what I can expect from my boys?).

The lady on the left: that's Dorthy, my mom's next door neighbor of, let's see, how old am I...almost 44 years. She's a part of our family, too, whether she likes it or not. I think she's still trying to get over the shock of seeing a family of 13 move in next door. True, we all moved out eventually, but then we brought more little kids back to visit.

The gentleman on the right, that's my brother-in-law Roy. He and my sister have been married about 31 years (and a charming couple they are!) He owns a construction business based in Smalltown, Oklahoma, where he was born, by the way.

Roy is the storyteller in the family. Real or fiction (and sometimes a very gray line in between) the man's favorite thing in the world is to weave a tale in front of a rapt audience. And they're usually worth your attention, and usually involve a reptile or horse or some type of equipment (possibly an injury, too). In spite of living in a small town, the man has met so many people throughout his life, had so many experiences at home and traveling...and manages to recount his adventures like a Western novelist.

Telling stories, the interesting kind, is a skill I've never had; I stumble over reciting what I had for breakfast.

Not Roy. I've wondered how he got so good at it. Maybe his dad taught him, or he learned it from his brothers. Maybe it's spending countless hours at the local restaurants or rodeos or family gatherings. It does seem like cowboys in general gravitate toward...each other. And when they do, they stand around with an arm propped up on a corral gate, a booted toe dug into the dirt, and the stories flow, usually with laughter at the end.

Wherever he learned it, storytelling is something he continues to practice on anyone who'll give him a chance. Mom and Dorthy, they've heard hundreds of his stories over the years, maybe the good ones more than once.

Interestingly, he's getting ready to be a grandpa pretty soon...

...and he'll have a whole new audience. 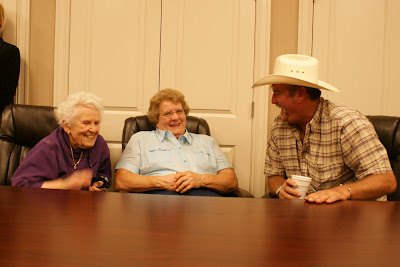 Girl - I LOVE reading your blog as you truly have a special gift with writing. You really should write a book as I would have a hard time putting it down!!

Thank you Christine and what a surprise too. I will forward this to our Dorthy. You are a pretty good story teller yourself. Mamma

Love it! Can't wait for you to read some of your little neice's writings from 5th grade, one is entitled, "Ramblin' Roy." rw

Those are great pictures. I can just imagine what is going on just by looking at their faces!
jw