Yes, the non-toddler had a birthday cake. Yes, I made it. Yes, I'm in Year 6 as The Mother Who Refuses to Pay for a Bakery Birthday Cake for Her Kids.

But for Alex's #4, maybe I shouldn't have been that mother.

I made the very big mistake of committing to making Alex a Lego cake. So I got reminded of it every day for a week. When am I going to learn that my boys have brains like steel traps when it comes to promises from their parents?

So I was in it whether I liked it or not. The very simple and exquisite example that enticed me so is pictured here. (Aside: does anyone know how they could have possibly gotten that well-defined edge around all the bumps when marshmallows are curved?)

My version wasn't exquisite. Or simple. It took me six hours. And I sweat (not on the cake, though, since I moved a fan into the kitchen). Seems those little blocks required freezing between layers of icing, and the little round thingies (big marshmallows halved) needed to be frosted indi-freakin-vidually.

I can't complain too much, really. I knew without a doubt it would be a challenge even with the simple design. Especially when I amped up the recipe to two cake mixes and making my own buttercream icing.

But for some reason I wanted the Lego cake to happen anyway. And happen it did. 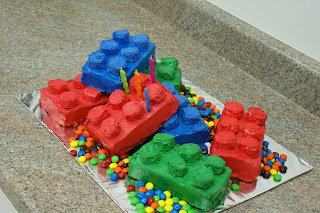 Alex loved looking at it, although he refused to eat any of it. Thanks, honey.

In the car today I decided to throw caution to the wind and ask him what kind of cake he wanted next year.

adorable cake...i am the mom who refuses to bake perhaps because noone would eat the results i come up with...
steff

it sounds to me like you're starting a tradition with those boys. the same way that mom used to make me potatoes and weenies for my birthday...which I bet she dreaded even more than you do an optimus prime cake...

anyway, I think they look great! I can't help but wonder - would fondant would have been easier or more difficult?

I think it looks awesome. I bet he stared at it for a long time.
rjl

Brit, I sure thought about using fondant, but I wasn't sure it would work and be any easier to cover a marshmallow with it than to frost it. I don't know. I think the look of the fondant would have been amazing, though...