In lieu of Halloween costumes, my son's school has Book Character Day today. So the kids still get to dress up in a costume, but they're required to find their inspiration in a book so maybe they get a little more creative than Batman and Spiderman (but check back here after Halloween for those staple costumes).

But that message is lost to Mickey, of course. I think he just likes how much of the book revolves around digging in dirt.

As for the costume, my friend Julie came through with the hard hat, thankfully. Pete just called from school, however, and said Mickey thought the hat was too uncomfortable to wear. Oh, well...

I got a couple of pictures, though, before he realized that. 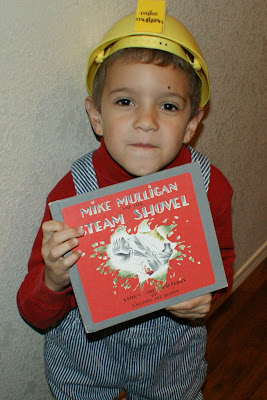 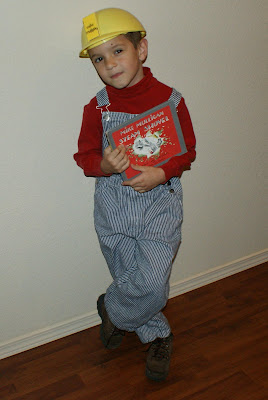 He reminds me of Eddie in the first pic. so cute..Actually K dressed up like a book charachter, Laura, for Halloween. rw

I think this is a great idea for schools to do and he looks so cute!
jw