Kids should have a Pain Transfer button to their moms

The other day I'm driving down Big Four Lane Highway on the way home from school with the boys.

Seemed like a great idea to crack the boys' back windows a couple of inches for some fresh air. So I did, and carefully remembered to hit the child-lock button so they wouldn't play the usual up/down, up/down, up/down with the electric window switches. That gets annoying.

Then I realized it wasn't such a great idea to have the window open...windier than I expected.

Four of his fingers were caught in the window.

I frantically tried to click the child-lock button and get the window down while exiting Big Four Lane Highway and crossing two lanes of traffic to turn right to park in a handicap parking spot.

I felt very handicapped at the moment.

Finally some combination of my banging on the window buttons worked and the window released his fingers. After we got parked and I made sure nothing was bleeding or detached, I unbuckled him from his seat and held him until we both felt better.

Then I took him to the park where he did this for a looooonnng time. 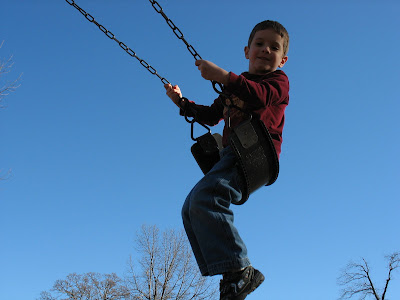 And I watched him with that look of glee on his face as he played.

And I tried to imagine I hadn't just heard "Mommy, what are you doing?!!??!!" only five minutes before.

Poor nephew. Don't worry, he'll forget it, unless you save that picture and print it out and then someday, years from now, you pull it out and say,"Oh, this was the day that. . . ."
jw

Poor thing. I have sympathy pain for you (and him). One of mine got his fingers got in the van door twice, once by me and once by an uncle. I just asked him if he remembered either time and he only remembers the uncle incident. It must be a mom thing, because I remember both times so vividly.

Good for you to give him lots of swing time.

At least you didn't let your kid almost slide onto an ice covered pond like I did when she was sledding. You think I would have been more cautious after L. had to make a dog rescue after he slid off the ice and into the icy water. Yes, it was a disturbing scene. But after all, we are not used to icy ponds and their dangers. Alls well... Poor older one with the crooked fingers. Kids can hurt themselves with any thing, at any given moment. rw

Ai-Yi-Yi!
I feel your sorrow, guilt and pain.
We have all been there.
Accidentally...okay, sometimes on purpose...things that we so regret and fret over.
They forget.
And better still - forgive easily.
Thank God.