Woo-hoo! I survived another Home Team birthday without purchasing a store-bought birthday cake. Although I came really close this time since I have not been feeling too domestic or creative or even much like opening up a can o' frosting.

But I did. And then some.

First, I've been talking about Bakerella's famous cake concoctions to so many people that I finally decided to take action...and came up with these little treats for Mickey's class at school on his birthday: 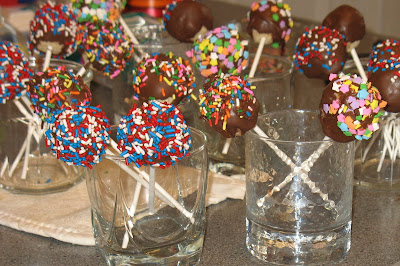 They don't look much like the perfect examples you'll see at Bakerella, but the concept is the same. I used vanilla cake and vanilla frosting and chocolate with sprinkles on the outside. Next time I'll be a little lighter on the sprinkles...some of them were so top heavy they were toppling out of the glasses.

But they made a lovely bouquet, which I'm sure all those five-year-olds stopped to view in wonderment before moving in for their take. 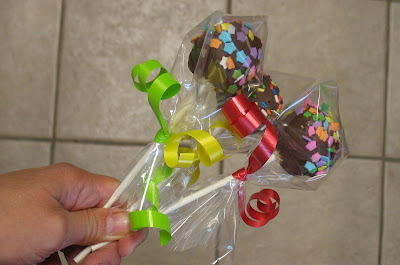 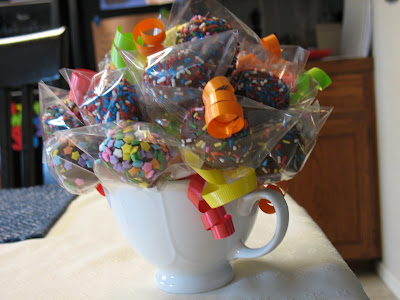 Really they were very easy to make...just a little time consuming, hence the boys stayed in their pajamas until noon on Monday. Come to think of it, so did I. 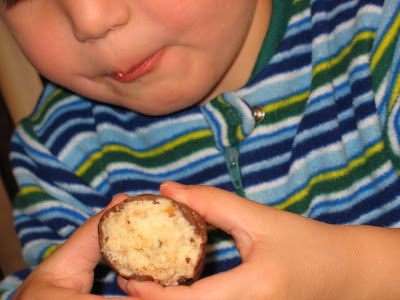 Then I set about to make a cake for our family party that night. Creativity? Zero. But the cake tasted good (which is an understatement: we are still forking the luscious leftovers tonight). And everything looks to be spelled correctly so I called it good. (This is the part where you forget you saw his real name...do I need to keep reminding you of that?) 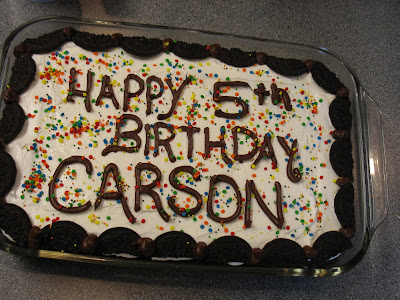 I know my boys won't stay little forever, and soon they'll catch on to the fact that birthday cakes can indeed come from Merritt's Bakery with intricate scenes of their favorite Marvel comics hero or their name written on it...straight.

But until then, let this be our secret. And let me continue letting them think their mom's a pastry chef. In training. Very early stages of training.
Posted by Christine at 2/18/2009 08:51:00 PM

These turned out very nice. Couldn't help but be a hit with little kids.

Those look so pretty. I need an event so I can make them. Rachel's 18th b-day is coming up. Do you think her friends would like them?
jw

I THINK I COULD EAT A HUNDRED OF THOSE. I NEED TO KNOW RIGHT AWAY HOW TO MAKE THOSE SO I CAN DO IT FOR BRANDONS NEXT SCHOOL PARTY!

oops, you provided a link with instructions...duh