A year ago today I was driving down 51st St. here in Tulsa with Cooper in the back seat.  It was about 9:30 a.m.  My cell phone rang and I glanced down to see it was my sister Judy, who works full time and never has time to call me during the day even if she wanted to...you know, to share a recipe or something.  So I knew something was up and didn't hesitate a second before I picked it up.
"It's Mamma," she said. "It's a heart attack."  And she said it as gently as she could.  I don't know how exactly that is, but I think she knew I was driving and she didn't want me to run off the road and I could hear the calmness in her voice.
So immediately I started to frantically try to stay calm and scanned the curb for a cut where I could turn around to go...actually at the time I didn't know where I was going.  I just needed to turn around and stop doing what I was doing.  Stop going where I was going.  Get to somewhere where I could do something right then and there because driving down the road was out of the question.
But there really wasn't anything I could do.  I quickly hung up with Judy after I'd gotten the details about Mom's condition.  She was in the hospital in her town about an hour away and I should just wait for more info.
Retelling all the details from that day a year ago would simply take me too long.  Since our immediate family is so big, a lot of the time was spent on the phone relaying information as we got it.  We soon set up texting and call "trees," so no one person had to call ten people.  As we got the news of Mom being helicoptered to Tulsa, I called my friend Amy who omigosh came to my rescue taking care of Carson and Cooper since Dwayne was out of town that day.  As a family, we talked to so many doctors and other medical people and tried to figure out how and why it happened and what lies ahead for our mom since she's now become a member of the cardiac patient club.
Skip ahead.  One year and a lot of doctor's visits and tests and other complications later. 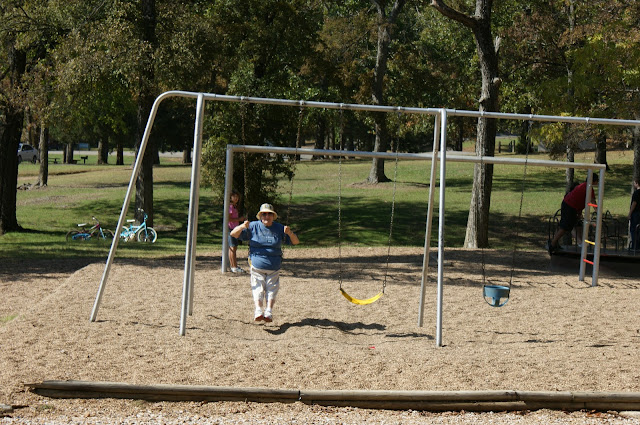 You could say she's recovering nicely.

It's been a long year for her, to be sure.  She's had to change a lot of things in her lifestyle and start putting herself first.  I imagine that's hard after a lifetime of taking care of so many people...family as well as friends.

But she's getting there.  And one year later she's trying to do too much for Christmas once again.  And she's not going to like reading that since that means her kids are going to start nagging her about taking it easy.

Ahhhh, all things back to normal...

I was thinking about her today, too, and tried to call her. I guess she's out "galivanting" around. (Did she make up that word? Must find out.) Nice picture of her. She always has been a swinger!

Oh you beautiful family! What a treasure. I love you. Mom

So glad you're back!!