I'm entering Scribbit's Write Away Contest this month. The theme is Colors.
His eyes were supposed to be brown. I already had one brown-haired, brown-eyed boy, and I was supposed to have another one who looked just like him. Just like all ten of my siblings look like me. That's just the way it was supposed to go.
But when Alex was born it was a little like visiting my neighbor's baby in the hospital: he had blond hair and blue eyes. For a fleeting nanosecond I remember thinking...is he really mine? Where's the olive complexion? Where's the dark hair? And my goodness, where are the brown eyes?
But our hospital bracelets matched up, so I took this fair little boy home with me.
Three months went by, his eyes were still blue, and people started to stare. I think they wondered if he really did belong to me and Pete. Meanwhile, his brother's hair and eyes just got darker as he got older.
But not Alex's. His hair got blonder and those eyes...they were well past the point where newborn blue turns to brown or some other color. They just kept getting bluer and bluer. When he was about six months old I finally realized: I'm going to be the mother of a blue-eyed child.
Huh?
Since then those blue eyes have completely and utterly stolen my heart. Now at almost three years old, it's not too often Alex looks directly at me, but when he does all I see is blue (and mischief). I see the unique color that turns even more vibrant when he looks upward at the sky, and I wonder how I got so lucky to get to see it every single day.
My sister once said when you see Alex coming, his blue eyes get there before he does. Hmm, I thought his incessant talking did...but I know what she means.
Both my boys have brought me unexpected joy in a lot of ways. But they're memories now.
Alex's blue eyes...they're my unexpected joy forever. 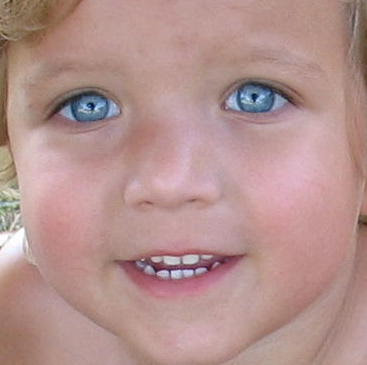 I can't help but be so proud.

His blue eyes are his crown and glory. But don't touch the hair, either.
RJL

I love the post. Again I say, don't cut his hair.

Oh my gosh! Have you Photoshopped that? His eyes are the bluest I've seen--the makings of a movie star :)

And I kind of felt a similar feeling when Grace was born (my first). I wasn't a very pretty baby and I kind of assumed my kids wouldn't be very cute and when she came out I was so surprised and pleased at how cute I thought she was. I was obviously a newbie huh?

I loved reading this because I have similar odd-mom-out feelings about my light-haired, blue-eyed sprite.

wow! what gorgeous eyes! and a cute, cute story! I have a son with blue eyes (like mine) and when my daughter came, after six months her eyes turned from blue to a beautiful sparkling brown and I felt like you in the opposite way, I could not believe I had a beatiful brown-eyed girl! I love it!

I can relate so well to this, since our daughter looks NOTHING like either the husband or myself. (Probably because she's adopted. Chuckle.) Very well-written. And your son does have gorgeous eyes.

what a gorgeous child!

Those eyes are to die for!

My husband and I have very different coloring. Our oldest is blond and fair-skinned just like me. When our daughter was born she had dark, dark brown hair and olive colored skin, similar to my husband's. I was so pleased for him. And then all her beautiful dark hair fell out and she became blond too. She still have the olive colored skin though.

Those eyes are so blue you could swim in them! :) You are going to have your work cut out for you when he gets older keeping all the girls away!

Congratulations on your win! Its a great post...I have a blue one and a brown one as well and its funny how people stop and wonder if they are "actually" related. :)

Love that photo! Thanks for stopping by and commenting the other day.