Doesn't everyone have a different version of Chicken Pot Pie? And does anyone's look like the ones that come in little round foil tins? There are so many varieties of CPP and techniques to make them that finding any perfect recipe is impossible. But I think I have found quite the contender...and from a most unlikely source (unless I'm the only one who doesn't feature Jessica Simpson as a chef).
The other day I mentioned I was watching Rachael Ray when Jessica was on and she was sharing her recipe for Chicken Pot Pie. The recipe was so simple I didn't even have to write anything down...my kind of recipe!
I intended to post the link to RR's website where I did look it up later, but unfortunately it's now nowhere to be found now...hmmm.
So here it is from memory:
Jessica Simpson’s Chicken Pot Pie

Separate the crescent rolls into triangles. Place about 1/3 c. chicken on each triangle and wrap the crescent roll around the chicken. It was a little like wrapping a 20 pound baby in a receiving blanket, but it does not have to be pretty because it’s going to be bathing in soup in a minute. Just do the best you can to cover the chicken.

Place the chicken "pillows" in a (sprayed with Pam) 9 x 13 dish. You’ll have eight of them. Mix the soups together and pour over the pillows. Then pour the chicken broth over the whole thing.

Bake at 350 until nice and bubbly.
That's the recipe as she made it, but I made a couple of changes:
-- Used two large poached chicken breasts, shredded.
-- Added most of a bag of frozen mixed vegetables to soup mixture before pouring over chicken.
-- Omitted chicken broth and 1/2 can of mushroom soup; whisked one can of milk into soups.
Enjoy! 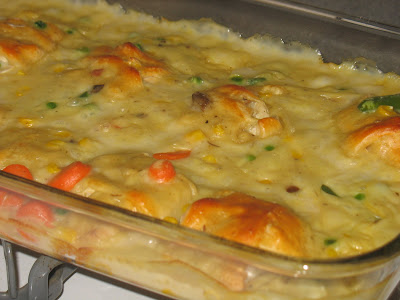 Holy Cow...er, Chicken! That looks delish AND simple. I even think my own Crumb Snatchers might give it a whirl and BS might actually be able to keep it down! Thanks Mamasita!

I wonder Jessica makes it for Tony.

i love crescent rolls. you can use them to make anything! i can't help myself, i have to share this example...

pinch two rolls together to form a square of dough.
place 1-2 tbps of cream cheese (plain or flavored) and 1-2 tbsp of jam or jelly in the center of each square. pinch the opposite corners together to form a pouch and bake until golden. yummy pastries in 10 minutes!

i reeeally need to get back to my baking blog...

Brit, I have to say my original title for this post was "Is there anything crescent rolls can't do?"

Oooo...this looks good! I love recipes that actually consist of things I usually have in my kitchen.

You can also make this using canned white meat chicken, like in the tuna section. That way you can always have the ingredients on hand. Also good with shredded cheese inserted with the chicken!