I admit it: I'm a Cake Boss and Ace of Cakes addict. I watch both Buddy and Duff create cakes with finesse and ease and the end product is always breathtaking. (Although I'm starting to prefer Duff's show over Buddy's, simply because I think his cakes are more creative and also he and his fellow bakers don't yell curse words at each other.)

These two guys are always using fondant. (Fondant is basically sugar and water and maybe one other simple ingredient, and it looks and feels like Play-Doh.) They roll it, shape it, cut it and it comes out looking perfect every time. I've watched them and a host of YouTube videos that show people rolling and shaping it with ease.

Why couldn't I achieve a simple fondant cake in my own kitchen?

So I set about to find the right brand, first of all. I'd heard the kind you get at craft stores doesn't taste good, so I sought out Satin Ice fondant at a bakery supply store. I was set.

I thought I'd start small, with cupcakes. I had a wonderful fondant/cupcake experience with my nieces last year...I figured I was home free this time.

So for Friday night's Olympic Kickoff Party at our house, I opened the tub of white fondant and prepared to create. My little plan was to do just five cupcakes in fondant and the rest in buttercream icing, just so I could practice rolling and handling the fondant for Mickey's 10-inch square birthday cake the next day. Two layers.

I rolled out five white circles, cut them and fastened them with buttercream to my cupcakes. Beautiful.

Then I had to color pieces of fondant for the Olympic rings I wanted to cut out and attach to the top of each one. Olympic rings, in case you live under a rock, are blue, black, red, yellow, and green.

And at the end of coloring little balls of fondant each color, so were my hands.

And my fingernails. And all the dead skin around my cuticles.

For three days now my hands have looked somewhat diseased.

But I had my colored fondant, by golly. And I cut the little rings out and displayed my Olympic cupcakes next to the buttercreams and it was cool. And our party guests thought they were cool, too.

But apparently not cool enough to actually eat.

They ate the buttercream ones, though.

So I could have saved myself the trouble and bought the cheap, easily-accessible fondant.

Didn't even take any. I guess I was mad at the cupcakes because no one ate one. They sat on my counter for 48 hours before I slid all five of them, sorta rock solid at that point, into the trashcan.

I think I totally satisfied my fondant urge with five cupcakes.

So then I'm staring at a tub of chocolate-flavored fondant (five pounds of it) that is supposed to be lovingly nestled around Mickey's birthday cake the very next day. The birthday cake that he and his friends would be served.

And I thought about how much work I'd likely put into that cake. And how I'd slave to decorate it just so. And stress about the cracks and crookedness of the large piece of fondant.

And I thought about how Mickey and his friends would prefer little clouds of buttercream icing.

So that's what I served.

And I decorated those babies in under three minutes.

And that chocolate buttercream was the kind that melts in your mouth and then you taste it and you don't even really care about the cupcake underneath it. It's that good.

So the five-pound tub of fondant is now making a nice doorstop. Or I guess I could sleep with it on my nightstand when Pete's out of town; if slung properly I believe it would put a burglar out cold.

The good thing about the stuff is that it keeps for many months. So if I get the urge to serve a cake that no one will eat, I'll be prepared.

In the meantime, I believe I'll stick with the tried and true, and leave the fancy stuff up to Duff and Buddy. 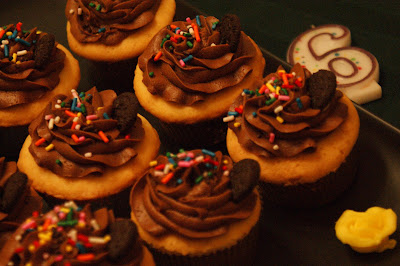 P.S. That yellow rose, the one that looks woefully out of place? That came in a package of six and apparently spoke to Mickey in the grocery store. How could I say no?
Posted by Christine at 2/15/2010 01:29:00 PM

Those look very pretty and I want to eat one. That is the bad thing about fondant. It's just not that good to eat! Happy Birthday to my newphew!
jw

Oh, it is so good to have you back. The cupcakes look lovely.
Sorry about the fondant. Can you return it? Mom

I would have eaten your fondant cupcakes. ;) Maybe your guests thought they were to pretty to eat?

HA! I was just about to text you and see how the cake went. Oooooh well. How about I'll come visit sometime and we can play with it and get frustrated together?

Brit, that oven cake is quite the work of art! The dishtowel is my favorite part...

I think maybe Chilihead is right: they didn't look inviting like "eat me" they looked like "look at me! And keep looking at me!"

Mom, I don't know if I can take the chocolate fondant back or not. 'Specially since I've already pinched off a little to taste it. I'm sure I can do something with it for the boys...